All of the unit’s inputs can be assigned to the mixer’s six output buses: left, right, Aux 1, Aux 2, Aux 3, and Aux 4. Selectable input delay on all six inputs and output bus delay on all six buses makes it easy to correct lip-syncing issues between audio and video. The unit’s 1/4″ headphone output can be configured with different user-presets and a favorite mode allows for quick source selection when monitoring.

The device can record to an SD card, CompactFlash card, or both memory card formats simultaneously in mono or poly WAV or MP3 file formats. The cards can be set to record redundant backups or combinations of WAV and time-coded MP3s for dailies and transcription purposes. The six inputs, output bus left, output bus right, aux 1, and aux 2 can all be recorded to individual tracks at 24-bit 48 kHz resolution for a total of ten tracks. This is useful for having both individual tracks from the six inputs, as well as the recordist’s field mix. Up to six tracks can be recorded at 24-bit 96 kHz and 192 kHz sample rates.

The device can be powered by any of four different simultaneously coexistent power sources, including 12 to 18 VDC from an external power supply (sold separately), two removable 7.2 V L-type lithium-ion batteries (sold separately), and six internal AA batteries (NiMH recommended, sold separately). The unit’s LCD display indicates battery levels for the various sources. When one power supply is depleted, the mixer will automatically switch to the next power supply without interruption. When all power supplies are depleted, the device’s built-in PowerSafe trickle-charge battery will keep the device running for an additional 10 seconds so that all files can be saved and closed properly and ensure that no data is lost. The built-in battery also allows the device to power up and start recording in two seconds for near immediate operation.

The unit is built with dedicated ergonomic controls for all major mixing and recording functions and features an LCD display that can be viewed in all types of lighting. The background of the display can be changed in the menu settings between day and night modes to make the meters easier to read. An integrated high-accuracy Timecode generator supports all common rates and modes. A USB port allows for the connection of a computer keyboard for easy entering of metadata to better organize files. The unit is built to be durable in the field, and includes gasket seals to protect the internal circuitry from the elements.

AES Digital I/O
Accepts AES3 and AES42 inputs with +10 V phantom power for digital microphones on XLR input 1, as well as up to four channels of AES output on XLR outputs 1 and 2 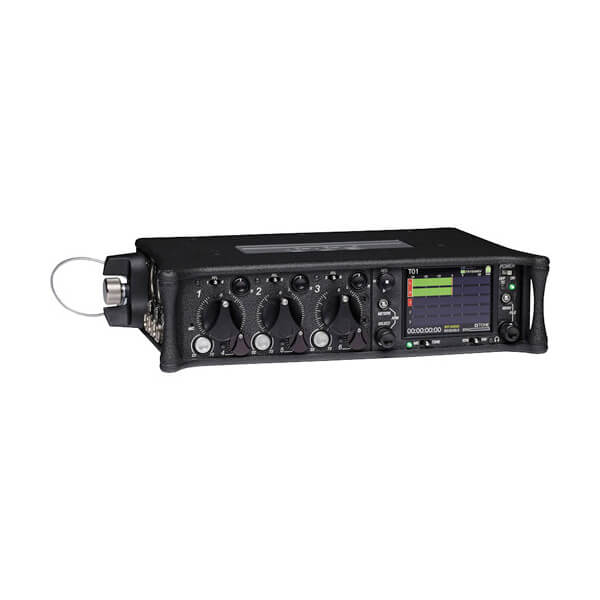